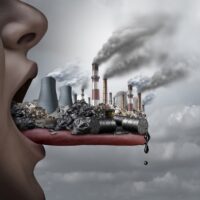 Causation is one of the most complex aspects of any toxic tort case. The plaintiff’s entire case often hinges on whether they can show both that a specific toxin can cause an illness, and whether the plaintiff was actually exposed to enough of that toxin to cause their particular illness. New York courts have been all over the place with regard to what constitutes sufficient proof of causation. Below, we discuss another in a line of cases that appears to limit the plaintiff’s burden and allow for significant damages without much in the way of direct causal evidence. Continue reading to learn about the case, and reach out to a knowledgeable New York toxic torts defense attorney if you need help defending against toxic tort claims.

New York’s Court of Appeals set the standard for causation evidence in toxic tort cases in 2006, in the matter of Parker v. Mobil Oil. The Court held that plaintiffs must demonstrate both that the toxin in question was capable of causing a particular illness (general causation) and that the plaintiff was exposed to sufficient levels of the toxin to cause their illness (specific causation). New York courts have varied with regard to what level of evidence is necessary in order to establish each element.

New York courts have been especially inconsistent concerning the plaintiff’s burden regarding specific causation. We previously discussed a case in which the appellate court upheld a verdict against the defendant even though the plaintiff’s expert failed to demonstrate any proper quantification of the amount of toxin to which the plaintiff had been exposed–it was sufficient for the plaintiff to have shown that asbestos has been known to cause certain illnesses without having to tie a specific amount of exposure to causing those conditions generally or in plaintiff’s case.

Another recent appellate court decision continues the trend of setting the bar low for specific causation. The matter of Stock v. Air & Liquid Systems Corp. concerned a plaintiff who was exposed to asbestos, contracted mesothelioma, and later passed away. A jury found in favor of the plaintiff’s estate and awarded substantial damages. On appeal, the Fourth Department rejected the defendant’s contention that the plaintiff had failed to establish specific causation.

The plaintiff’s expert testified that, based on her review of other studies of workers exposed to asbestos in similar circumstances, the asbestos was a substantial contributing factor in causing the plaintiff’s illness. The court found that opinion sufficient to show causation, emphasizing that “it is not always necessary for a plaintiff to quantify exposure levels precisely or use the dose-response relationship” (seemingly in contravention of the specific causation requirement). It’s sufficient for the plaintiff to show “evidence from which the factfinder can conclude that the plaintiff was exposed to levels of [the] agent that are known to cause the kind of harm that the plaintiff claims to have suffered.” Here, it was enough that the plaintiff had been exposed to visible asbestos dust on a “routine basis” while performing work on component parts of the defendant’s products (gaskets and packing).

For seasoned, thorough, and trial-ready legal advice and representation regarding a New York toxic tort or insurance defense claim, contact the Islip offices of Richard A. Fogel at 516-721-7161.