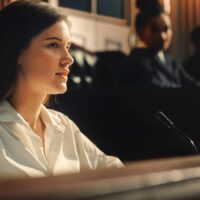 Expert witness testimony is an essential component of many types of litigation, from medical malpractice to insurance defense. Whether a given witness’s testimony is admitted can be the most important deciding factor in a lawsuit. Nowhere is this more true than in toxic tort cases. We’ve talked before about how an expert’s opinion on, for example, specific causation, can mean the difference between a successful class action and a case being dismissed in the early stages. The standard for admitting an expert’s opinion in federal court has oscillated wildly over the years, with different courts taking vastly different approaches in different cases. This is in addition to the fact that New York has a much lower standard of admission for expert testimony in state court actions. Most lawsuits are brought in state court.

The U.S. Supreme Court is considering whether to grant certiorari in the Roundup toxic tort cases, specifically on the issue of whether the lower federal court used the proper standard in evaluating expert testimony. At the same time, the Federal Advisory Committee on Evidence Rules is considering amendments to Federal Rule of Evidence 702, which governs expert testimony admissibility in federal courts. Read on to learn about the proposed amendments and the issue that arose in the Roundup weedkiller cases. Call a knowledgeable New York toxic tort defense attorney for help defending against toxic tort or products liability claims.

Federal Rule of Evidence 702 governs the admissibility of expert testimony in federal courts (but not state courts). Rule 702 requires experts to be qualified, requires the testimony to be necessary to educate the jury on a technical or scientific matter, and requires that the testimony be based on the reliable application of scientific principles to evaluate sufficient facts or data. Some federal courts set a low bar for admissibility, allowing expert testimony to be shared with the jury and expecting the jury to weigh the reliability of the expert’s testimony which is closer to the New York state court rule. Advocates for a more stringent standard argue that parties seeking to admit expert testimony should be forced to prove the reliability of the expert testimony by a preponderance of the evidence for admission. Some courts have taken this approach.

The federal judiciary’s Advisory Committee on Evidence Rules has spent several years reviewing the inconsistent application of Rule 702. The Committee recently published proposed amendments to the Rule in order to clarify the standard to be used when evaluating the admissibility of expert testimony.

Rule 702 does not currently include a preponderance standard, but Committee notes accompanying the Rule state that “the admissibility of all expert testimony is governed by the principles of Rule 104(a),” pursuant to which “the proponent has the burden of establishing that the pertinent admissibility requirements are met by a preponderance of the evidence.” The Advisory Committee has found that “many courts” incorrectly apply Rules 702 and 104(a) by holding that “the critical questions of the sufficiency of an expert’s basis, and the application of the expert’s methodology, are questions of weight and not admissibility.”

The proposed amended rule would explicitly require the proponent of expert testimony to “demonstrate[] by a preponderance of the evidence that” the expert is qualified, and the testimony is sufficiently supported and reliable (the factors stated in the current iteration of the Rule). The Committee is entertaining comments on the proposed amendments until February 16, 2022.

If enacted, the amendments would codify a heightened standard of admissibility for expert testimony in federal courts. In toxic tort cases in federal court, for example, plaintiffs would have a significantly higher burden for admitting testimony regarding causation.

Meanwhile, the Supreme Court may have cause to consider the issue. Monsanto is currently embroiled in a number of lawsuits around the country concerning whether its Roundup herbicide causes cancer. Monsanto is seeking Supreme Court review of two issues raised in one of the class actions, including whether the “Ninth Circuit’s standard for admitting expert testimony—which departs from other circuits’ standards—is inconsistent with this Court’s precedent and Federal Rule of Evidence 702.” A heightened standard of admissibility in that case could affect billions of dollars in settlements.

For seasoned and considered legal guidance on a New York toxic tort or insurance defense claim, contact the Islip offices of Richard A. Fogel at 516-721 -7161.

By Richard A. Fogel | Posted on February 10, 2022
Skip footer and go back to main navigation