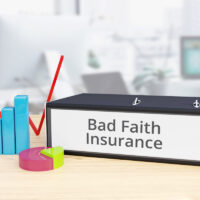 In a recent decision from the United States Court for the Northern District of New York, an insured’s claim of bad faith claims handling was dismissed on a motion for summary judgment because the complaint did not “specify any alleged acts evidencing bad faith.” Learn more about the case below, and contact an experienced New York insurance coverage defense attorney with any questions.

The case, titled Lohnes v. Liberty Mutual Ins. Co., arose out of a traffic accident. Christopher Terrance was the at-fault driver in a crash that resulted in severe injuries to plaintiff Maria Lohnes. At the time of the accident, Terrance was carrying liability insurance coverage with Liberty Mutual, a policy purchased by his mother. Nevertheless, Liberty disclaimed coverage when learning of the incident. Lohnes sued Terrance and won a judgment against him totaling $336,500.34. Terrance assigned his claim against Liberty for breach of duty to defend and indemnify to Lohnes.

Lohnes responded by arguing that a plaintiff can establish a bad faith claim by showing that the insurer acted in a way that “constituted a gross disregard for an insured’s interests,” which can be accomplished by showing that the insurer “deliberately or recklessly failed to place the insured’s interests on equal footing with its own.” By failing to defend Terrance or attempting to settle the claim, Lohnes argued that Liberty acted in bad faith.

Judge McAvoy ruled that Lohnes had not presented evidence of bad faith that went beyond the evidence presented to prove a breach of contract. The opinion noted that “New York law ‘does not recognize a separate cause of action for breach of the implied covenant of good faith and fair dealing when a breach of contract claim, based upon the same facts, is also pled.’” (Citing to Cruz v. FXDirectDealer, LLC, 720 F.3d 115, 125 (2d. Cir. 2013)). Judge McAvoy noted that the facts supporting Lohnes’ claim of breach of contract were identical to those supporting her claim of bad faith, necessitating dismissal of the bad faith claim.

This ruling may indicate a significant difference in pleading requirements between New York state and federal courts on claims for bad faith claims handling. In an earlier post on this blog, we shared a ruling from the First Department of the New York Appellate Division stating that a plaintiff claiming bad faith did not have to meet heightened pleading requirements when seeking consequential damages for the alleged bad faith. The Lohnes ruling may diverge from this precedent by requiring that plaintiffs plead facts showing how the defendant’s bad faith resulted in additional consequential damages.