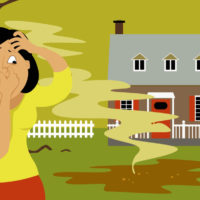 The Third Department of the New York Appellate Division (Albany) recently considered the claims of a former tenant in a shopping plaza against the property owner. The Appellate Division rejected her allegations that she suffered physical injury and loss of income due to the property’s problematic sewage system. Read on to learn more about the case and contact a knowledgeable toxic mold and landlord defense attorney with any additional questions.

The case in which these issues arose is titled Colucci v. Stuyvesant Plaza, Inc. Beginning in 1990, plaintiff operated a franchise location of Merle Norman Cosmetics in Stuyvesant Plaza, owned by the defendant. Plaintiff claimed that the sewage system at the shopping mall had repeatedly backed up, flooded, and otherwise malfunctioned during her time as a tenant. She argued that problems with the sewage system occurring between September and December 2004 resulted in the shuttering of her business, as well as causing her serious health issues due to exposure to mold and sewage. Plaintiff argued that management of the mall had breached the lease agreement by failing to maintain the sewage ejector pump, among other issues.

The parties were ordered by the court to produce expert witness reports by May of 2015, but while the defendant complied with this request, the plaintiff did not. In July 2015, the defendant filed a motion for summary judgment to have plaintiff’s claim dismissed. After receiving a series of extensions from the court, plaintiff’s counsel filed an opposition to the summary judgment motion in May 2016. Plaintiff included affidavits from several witnesses, including her personal physician. The trial court considered her opposition but dismissed the lawsuit, and the Appellate Division upheld this decision last month.

The court explained that an alleged victim of toxic exposure must “set forth her exposure to a toxin, that the toxin is capable of causing the particular illness (general causation) and that she was exposed to sufficient levels of the toxin to cause the illness alleged (specific causation).”

Even if the reports had been admissible, her physician’s report was “conclusory and vague,” failing to “establish specific causation.” In contrast, the court described an affidavit produced by the defendant from an expert in patients exposed to toxic substances. The toxicologist reviewed the physician’s report and plaintiff’s medical record, and concluded that the theory linking her symptoms with toxic exposure was “novel and is not generally accepted within the medical or scientific community.” He went on to explain that the amount of mold which was found at the shopping mall wasn’t great enough in amount to “cause injury or ailment of any significance or duration.” The physician’s explanation for how the conditions at the mall made plaintiff ill were “considered unsupported fringe theories” with “no scientific support.” The court cited both the plaintiff’s year-long delay in meeting mandatory discovery deadlines, and the poor reliability of the reports eventually produced, as the reasons it upheld the dismissal of plaintiff’s claims.

For skilled, effective, and experienced legal assistance with a toxic tort or landlord defense claim in New York, contact the Law Offices of Richard A. Fogel at 516-721-7161.