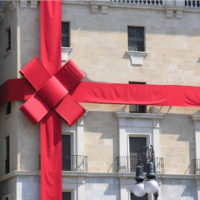 The Law Offices of Richard A. Fogel recently scored a victory for the fifty percent heir of a parcel of property in Nassau County who was in a stalemate with his fellow fifty percent heir, his sister. The property will now be partitioned and sold by a referee appointed by the Supreme Court.

The brother and sister have been managing a property owned by their father since he passed away in 1998. The property, located in Island Park, New York, has several industrial buildings on it, serving as the home of business tenants such as a car dealership, an iron working company, a motorcycle dealership, and a residential construction business. In his will, the father left the property to his two adult children in equal shares.

When multiple people have an equal and undivided ownership interest in a piece of real property, they will often be considered tenants-in-common. Generally, tenants-in-common have a right to make use of the entire, undivided piece of property. When those co-owners cannot agree on how a property should be used or disposed of, they have a right to what’s known as a partition, wherein the property is divided if feasible, or sale by partition if it is not feasible to divide the property (as in the case where there is one building), where the property is sold and the proceeds divided equally between the owners. In order to succeed on a motion for summary judgment of partition, the party making that request needs to show that they have an ownership right, that they cannot reach an agreement with the fellow owner, and that there are no additional factual issues that would need to be resolved for the court to make a decision.

In this case, the sister opposed summary judgment arguing that neither she nor her brother could partition the property because their father’s will had not yet been offered for probate, and the formal title to the property was still in the father’s name. The brother argued that the partition statute does not have a requirement that a will be probated first as long as there is no factual dispute that the parties to the partition are the only heirs to the property; the sister admitted in her answer that they were the owners and the only heirs and that they had been acting as owners since 1998. The Court agreed with the brother, explaining in its order that, when real property is passed through a will, the property is transferred immediately upon the death of the testator. Thus, the brother and sister became entitled to possess and transfer the property at any time after their father passed away. The Court, after establishing that the siblings were equal owners, that they had been unable to reach an agreement on how to divide the property otherwise, and that no other factual disputes remained which needed to be resolved before there could be a decision, granted the motion for partition and the appointment of a referee to handle the property’s sale.

If you are facing a complex real estate dispute in New York and need proven, knowledgeable legal help in asserting your rights in court, contact the Islip law offices of litigation attorney Richard A. Fogel for a consultation on your case, at 516-721-7161.