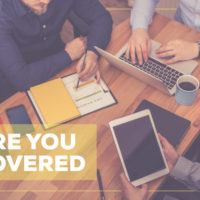 Burlington Insurance provided an insurance policy to Breaking Solutions, Inc. (BSI) for a subway tunnel excavation project. That policy included the New York City Transit Authority (NYCTA) and MTA New York City Transit (MTA) as additional insureds. BSI’s policy stated that NYCTA and MTA were entitled to coverage for property damage, bodily injury, or personal and advertising injury “caused, in whole or in part, by: 1. Your acts or omissions; or 2. The acts or omissions of those acting on your behalf.” [emphasis added.]

During the excavation project, an employee of NYCTA was injured while attempting to escape an explosion at the excavation site. A subsequent investigation revealed that the explosion occurred when one of BSI’s machines made contact with a buried live cable which NYCTA had neglected to disconnect in advance of the dig. In other words, the worker was injured because of NYCTA’s negligence, not because of a mistake by BSI.

The major point of contention was the phrase “caused, in whole or in part, by.” Burlington argued that this phrase was intended to provide coverage only where the claims arose out of the work or responsibility of the named insured, BSI. NYCTA and MTA argued that other insurance clause meant that but for the fact that BSI was conducting an excavation project, the injury would not have occurred. Under this interpretation, BSI need not have been negligent in causing the harm for the additional insureds to receive coverage.

The Court of Appeals concluded that, where the named insured was not legally responsible for an underlying injury, but was only a “but for” cause, the insurer does not have a duty to defend. NYCTA and MTA argued that “caused, in whole or in part, by” should be interpreted in the same way as “arising out of,” so that there is coverage for additional insureds even when the named insured isn’t negligent. The court disagreed that “arising out of” was equivalent to “caused by,” holding that “caused by” indicated that the insured needed to be responsible for the harm rather than simply associated with the harm-causing incident.

The court also pointed to the history behind the language of the contract itself as support for its decision. The court’s opinion cited testimony from the organization that drafted the contract language, taken from a form created by the Insurance Services Office (ISO). The ISO explained that it had specifically chosen the phrase “caused…by” in order to avoid a trend among courts to interpret the phrase “arising out of” broadly. Specifically, the ISO wanted to create a contract that prevented liability coverage where only the additional insured had been negligent. The Court of Appeals dismissed NYCTA and MTA’s claims for coverage against Burlington.

The decision is consistent with long standing case law regarding additional insureds. The additional insured clause is meant to protect an owner, general contractor or other named party from vicarious liability arising out of the acts of the insured. It is not intended to be a substitute for liability insurance for the other’s party’s own acts of negligence. In other words, NYCTA and MTA still need to purchase their own liability insurance for their own acts of negligence. Otherwise, such entities would be encouraged not to purchase liability insurance. That is not in the public interest and not something courts want to encourage. Otherwise, the cost of such insurance would fall on contractors and sub-contractors that are usually far less capable of bearing the financial burden of such insurance. Indeed, a broader interpretation of the additional insured clause would probably make such policies unaffordable to contractors. Imagine if “Joe’s Plumbing” had to buy insurance for the MTA for any claims whatsoever because Joe’s Plumbing was working on a project in the vicinity. If the injury did not arise out of Joe’s negligence, Joe’s insurance should not be applicable. In the instant case, the Transit Authorities’ argument twisted logic on its head. There was an excavation project because the Transit Authorities wanted work done, not because the contractor was doing the work. The contractor should not be liable for the failure of the Transit Authorities to do what they were supposed to do. If the contractor was not liable, its insurer should not be liable.

If you need seasoned, skilled coverage counsel in New York, contact the Law Offices of Richard A. Fogel, P.C. for a consultation, at 516-721-7161.