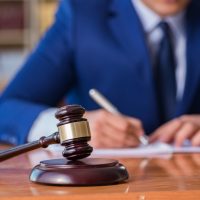 New York courts have a practice of construing policy language in a manner most favorable to policyholders where possible. A recent example illustrates the absurd results such an approach can yield. A New York appeals court recently parsed the difference between “expected or intended” injury and injury that occurs after a policyholder has been explicitly warned of that exact injury. Somehow, the appeals court found air between those two concepts. To learn about the case and the ruling, read on. If you are dealing with allegations concerning lead paint, asbestos, or other toxic torts, call a seasoned New York lead poisoning and toxic tort defense attorney for advice and representation.

The case titled Certain Underwriters at Lloyd’s, London v. NL Industries, Inc. concerns a manufacturer of lead paint. NL Industries used to manufacture lead paint through the “Dutch Boy” brand. NL was sued by several California municipalities which alleged that NL marketed lead paint while fully aware of the dangers posed by its product. The municipalities won summary judgment, fought back and forth over appeals for the next two decades, and ultimately reached a settlement. NL agreed to pay $101.6 million into an abatement fund to be used to prevent lead paint ailments in the future.

NL then sought coverage from its commercial general liability insurers. There were over 300 policies at play, covering 70 years at issue. The insurance providers denied coverage, primarily relying upon two arguments. First, the policies excluded harm NL “expected or intended” to cause. Second, the insurers argued that even if the lead paint damage was not excluded from coverage, NL was not actually liable for any “damages” recoverable under the policy.

The first argument concerned policy language excluding intentional harm committed by NL. A representative policy read in relevant part: “’Occurrence’ means an accident, including injurious exposure to conditions, which results, during the policy period, in bodily injury or property damage neither expected nor intended from the standpoint of the insured” (emphasis added). Because NL was found liable for intentionally selling products that it “knew to be hazardous,” having “actual knowledge of the hazards of lead paint” and knowing that it would “deteriorate and cause serious injury,” the insurers argued that NL must have “expected or intended” harm to person or property.

The Appellate Division, First Department (Manhattan and the Bronx) rejected the insurers’ argument. The Appellate Division contended that the California courts also found liability based on contentions that NL’s actions “posed a serious risk of harm” or “significant risks of harm” that would “pose a public health hazard,” which does not clearly equate to a finding “that NL either expected or intended to harm any person or property.”. As explained by the trial court, “what makes injuries or damages expected or intended rather than accidental are the knowledge and intent of the insured. It is not enough that an insured was warned that damages might ensue from its actions, or that, once warned, an insured decided to take a calculated risk and proceed as before.” The Appellate Division found that the allegations in the California court proved only that NL was aware of a risk of harm, not that they expected or intended a coverage-triggering event to occur.

The issue here is the difference between objective versus subjective intent. For example, if a person jumps off a forty-foot bridge irrationally believing he can dive into the water and swim away safely, is his resulting death an “accident”? Some courts have held that intent must be decided by a “reasonable person” which is an objective standard, but clearly the First Department here required proof of subjective intent to harm by NL and decided that the California decisions were not sufficient.

The Appellate Division also found that the settlement payment to the abatement fund had a “compensatory effect,” qualifying as covered damages for insurance recovery purposes, disagreeing with an Ohio court that held that such funds for “future harm” are not damages within the policy period as defined by the policy.

Under New York law, NL can pursue a further appeal to New York’s highest court but because the decision was unanimous, it can only do so by leave of either the First Department or the high court itself at the court’s discretion. New York’s high court hears very few civil cases each year because of this procedural requirement.

For knowledgeable and effective legal guidance on a New York insurance defense or toxic tort claim, contact the Islip offices of Richard A. Fogel at 516-721 -7161.