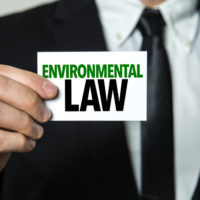 Eight months into the Trump Administration, the legal community is still learning how the Department of Justice will run under the helm of Attorney General Jeff Sessions. Recently, Sessions issued a memo that will bring about a substantial change in how the Department of Justice handles settlements in civil and criminal matters, and in particular, settlements of claims of environmental harm. Experts are undecided on the full implications of the recent memo.

Supplemental environmental projects, known in the field as “SEPs,” are environmental remediation projects undertaken by entities accused of a violation of environmental law. These projects are often used as a substitute for a portion of the fees demanded by the Department of Justice in a settlement of environmental claims. For example, if a company is accused of allowing unauthorized chemicals to flow into a local estuary, and that company is charged with a substantial fine, that company might be relieved of paying the entire fine by providing funds to a local private group that will restore local aquatic bird habitats damaged by pollution. Other examples provided by the Environmental Protection Agency (EPA) of acceptable SEPs include paying for a third party to mitigate harm from lead paint or asbestos from a property owned by a third party and purchasing renewable energy credits from power providers or green tag brokers.

SEPs have been a useful tool both for companies and the Department of Justice in facilitating settlements of environmental claims, while also resulting in improvements to the health of the environment and support of local environmental improvement organizations. SEPs have long been in use, after the EPA issued formal guidance in 1991 that allowed for their use when settling civil claims of violation of environmental laws and regulations.

New memo could limit or end use of SEPs

On June 5, 2017, Sessions issued the memo in question, which calls for the Department of Justice to no longer include payments to third party entities unrelated to the government in settlements of both civil and criminal matters. Since SEPs often involve payment to third parties that are unrelated to the government, this policy change could either substantially weaken or effectively eliminate the use of SEPs in environmental settlements.

The memo does include an exception for “an otherwise lawful payment or loan that provides restitution to a victim or that otherwise directly remedies the harm that is sought to be redressed, including, for example, harm to the environment or from official corruption,” but whether this exception will be interpreted broadly or narrowly is unclear. Due to the uncertainty surrounding the field of environmental law enforcement and claim resolution, it is more important than ever to seek representation from a tested and effective New York environmental law attorney when facing claims of violations of federal environmental rules.

If your New York organization is facing environmental law or remediation issues, speak with an attorney who understands both the law and the science at issue in your claims by contacting the environmental law and toxic tort attorney Richard A. Fogel for a consultation, at 516-721-7161.