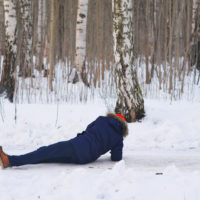 In a recent opinion issued by New York’s highest court, the Court of Appeals reaffirmed that property owners will not be held liable for slip-and-fall injuries that occur during a storm. The court affirmed the Appellate Division’s decision denying damages for injuries received during an ice storm in Newburgh.

In Sherman v. New York State Thruway Authority, a New York State Trooper slipped on a patch of ice as he walked to his vehicle from his barracks. He testified that there was an “intermittent wintry mix” that morning, with rain falling when he fell and an ice storm the night before. The plaintiff brought a claim for his injuries against the New York State Thruway Authority – the department responsible for remediating hazardous conditions at the barracks – for negligently failing to remove the ice or apply salt to the sidewalk. The court determined that there was precipitation falling when the accident occurred, that there had been precipitation for a long time before then, and that temperatures were still nearly freezing. Both Sherman and the Authority moved for summary judgment. Both motions were initially denied, but the Authority’s motion was granted by the Appellate Division, based on the Authority’s argument that the Storm in Progress doctrine applied and shielded them from liability.

The Court of Appeals summarized the Storm in Progress doctrine as follows: “Although a landowner owes a duty of care to keep his or her property in a reasonably safe condition, he “will not be held liable in negligence for a plaintiff’s injuries sustained as the result of an icy condition occurring during an ongoing storm or for a reasonable time thereafter.” The question at trial then becomes what sort of conditions were present when the victim was injured, and whether a reasonable amount of time had elapsed to allow for the owner to have taken measures to remove ice or snow from the site where the accident occurred. In the case at hand, the Court of Appeals pointed out that it was undisputed that a storm was ongoing when Sherman slipped and fell, and that it continued to be at near-freezing levels. As a result, the Authority did not yet have a duty to abate the dangerous condition of ice on the sidewalk where Sherman slipped and fell.

If you are facing claims of liability for injuries which occurred on your property, or are otherwise in need of an experienced insurance defense litigator, contact the seasoned and trial-ready New York attorney Richard A. Fogel for a consultation on your case, at 516-721-7161.